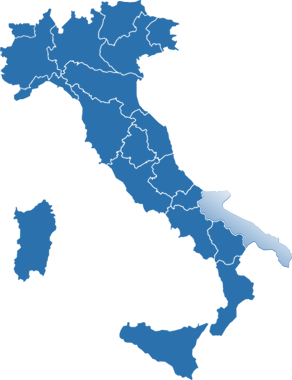 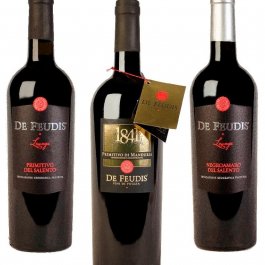 Property: This trade mark growns out from the collaboration between Fabiano Family, wine makers in Veneto for more than 100 years, and Varvaglione Family, wine growers in Puglia since 3 generations.

The trademark De Feudis proves the ancient Apulian origin of Fabiano Family. From Sergio De Feudis, at the end of the XVII Century, was born in Trani Antonietta De Feudis, married to Francesco Fabiano, founder of the homonymous winery.

Initially built up in the South, particularly in the bulk wine market, moved later to Veneto. First settled in Venezia, where in 1912 Francesco Fabiano, Nicola Fabiano’s son and Francesco and Antonietta’s grandson, opened a wine shop just a few steps from Saint Marco’s Cathedral, carrying on the bulk wine commerce from Puglia; later in Veorna, where he engaged himself in the production and distribution of bottled wine, buying a small estate in the region of the Garda Lake.

After more than 100 years of wine making Fabiano decided to come back to its origin and create a new brand of Apulian wines, called indeed De Feudis. This project has been carried out with the help of an old friend who can in turn rely on a long tradition in wine growing and making in Puglia.

The De Feudis wines grow out from the cooperation of Fabiano, wine producer since more than one hundred years, and Varvaglione, estimated friend and well-kwon winemaker in Apulien. They celebrate more than one century of history, matching together tradition and experience.

Their selection of wines includes a Verdeca and a Negramaro Rosato IGT Salento, wines with a delicate bouquet, a full richness and pleasant freshness, underlined by a young and clear packaging. There is also Primitivo IGT Puglia, with an intense, fruity bouquet, full bodied but with a pleasant softness suitable for all the courses of a meal.

We find the two wines of the LOUNGE line, a Negramaro and a Primitive IGT with a volume of 12.5%, both full-bodied and pleasantly drinkable, thanks to their smooth and velvety flavor.

Finally, there is OTTOCENTO, a Primitive DOC from Manduria, made from grapes harvested by hand and put in crates, whose 14% volume and strong, elegant body make it an excellent quality wine. It has an exclusive label and comes in a rather heavy bottle sold in 3-bottle gift case. It is produced in limited number and will only be sold in the best specialty shops to whom Viver will offer it in the coming months.