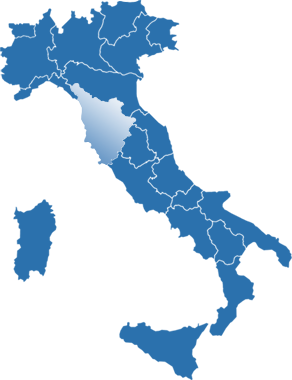 THE COMPANY
"Integrate, tough and generous as their ancestors The Benducce.... a company a family"
The company is owned by the Tornesi since 1865. The attachment to the origins is firm and strong, each member of the Tornesi family was born, lived and worked within the company making it grow year after year.
The company has always produced wine, in 1967 Gino Tornesi enrolled his vines in Brunello, becoming one of the first members of the Consortium, as a producer but not as bottler. It will be his son Maurizio to start the production and commercial activity in 1993 with the first production of Rosso di Montalcino and in 1998 with the Brunello, vintage 1993.
Today the company boasts of a new winery, built in 2009, equipped with all the equipment but at the same time has a classic, traditional style with its structure entirely in stone and stone.
The company in total owns 5 hectares of vineyard, divided into:
One hectare and two thousand meters in Montalcino, Località Benducce with South - East exposure with an altitude of 500 meters;
Two hectares and eight thousand meters in Castelnuovo dell'Abate, with South-West exposure with an altitude of 300 meters;
In addition we have two plots of land for rent, equal to one hectare and five thousand meters, one with North - West exposure and one South - East;
The microclimate is certainly favorable for the wine activity, thanks to the proximity of the sea and Mount Amiata.
The soils are mainly composed of galestro and rock, this favors a good drainage of rainwater.
We tried to keep a part of the vineyard terraced, as it was in the Tuscan culture. The vines are aged between 7 and 30 years. The rearing system is spurred cordon, 4,200 vines per hectare.
Within our company we grow only the Sangiovese Grosso called Montalcino Brunello, with a production of 60 quintals of grapes per hectare. The vineyards and olive groves are cultivated in a guided struggle, without use of herbicides and with organic fertilization. Being a small family-owned company, most of the work is done manually, like the harvest that takes place in September and October.